CBS- Concrete Block and Stucco – and how to screw it up.

You may find this post beneficial, because it deals with the most popular exterior wall system in S. Florida: CBS.

In this particular case, the general contractor strongly disagreed with the facts and with my diagnosis, and claimed they constructed walls in this manner for 20 years or so, at many other projects ,and it always worked.  And I had the temerity to tell them  the weather resistive barrier is missing, and that the building didn’t even comply with the building code? And showed them photographs of their construction deficiencies?

Funny how the same thing looks different through different glasses. I typically get calls to investigate leaks through these walls, while they typically erect them.

We are talking about the CBS (Concrete Block and Stucco)- the most popular exterior wall system in South Florida.  It’s simple: you erect a wall out of 8″ deep concrete masonry blocks, which are heavily reinforced and grouted to comply with the HVHZ (high velocity hurricane zone)  requirements, and place three coats of cement-lime stucco over it, then you paint it with a latex paint.  It’s a time-honored way of erecting exterior walls in this region, with many local variations. What can possibly go wrong?

Several things. If you attended the “Greening” seminar, you already know about the general movement joints issues which arise when CMU walls are erected AFTER the concrete frame, and your structural engineer  did not address the movement joints, and your architect didn’t coordinate with the structure (what’s the odds of these two occurrences happening simultaneously? 100%).  However, in this case, we are talking low-rise, high-budget mansion on a waterfront in Miami Beach. Which means, the concrete sub most likely poured the cast-in concrete over the CMU, as opposed to the other way, regardless of what the structural set might have told them, because they always did it this way. Thank God!  One problem less.

However, the exterior wall leaks like a sieve, in the middle of the dry season in South Florida. Why is that? One look at the wall, with several convenient exploratory openings left for me is enough to tell me the whole story: the concrete heads were not vibrated, creating a Swiss-cheese like assembly, and the brand-new stucco shows a spiderweb of cracks. The trouble is none of these assemblies are normally specified to be the weather-resistant barriers, although some local general contractors bully their subs into making them temporarily weather resistant till they collect their paychecks.  The leaks typically appear at water tables, created by floor slabs and windows’  heads and sills, because this is where the wall happens to be interrupted. This is why  the building code wisely requires through-wall flashings. The established practice is to provide none, and instead to bully the window and door contractor. Also, the concrete sub was bullied into developing a slab-edge depression, which were supposed to act as a through-wall flashing. It’s a loss of time and money and it doesn’t work, because by the time the building is finished, the rear side of the depression had been filled with mortar droppings, and rain water seeping through the exterior wall jumps over these dropping to the floor and  finds the interior direction more attractive, according to the general rule “no self-respecting drop of water  would ever miss the opportunity to enter a building.”

Sounds simple. Not code-compliant = faulty. However, who ever reads the code? Instead the GC bullied the window contractor into replacing the fenestration. Why? Because if it leaks around windows, it must be the windows that are leaking… Please replace them.  I guess I was hired to help them further this line of attack.  Sorry.

However, there are more mind-boggling surprises. We haven’t started yet.

Thermal Insulation. In this case the contractor used the vapor-retarding reflective wall insulation which seller promised to reach the code-compliant R-values, (funny enough, the seller refused to provide the actual test reports). Not that it really matters though. It’s stapled onto the vertical wood furring, before the GWB is installed. Which means two things:  regardless whether the thermal insulation works as promised or not, it’s bypassed by having the ventilation cavity in front of it, rendering it useless anyway, and the vapor retarder placed on the wrong side is also bypassed by the cavity. It’s brilliant: constructing the CBS wall in the traditional way (with the benefit of drying rain leaks by the AC), while giving the appearance of having a thermal insulation. The only party who loses in this deal is the owner who pays not only for the useless “insulation,” but also the exorbitant electric bills for the life of the building, and perhaps the mechanical engineer who may not understand where all this  load is coming from, rendering his or her system irrelevant.

Vapor retarder. The aluminum insulation used on the walls provides a vapor retarder for the field of the GWB (wherever it hasn’t been perforated by conduits), which means two things: It’s installed on the wrong side of the wall, but since it’s bypassed by the ventilated cavity open to the suspended ceiling, it’s irrelevant, except for the latent load seen by the AC system. Therefore, it protects the vapor-resistant finishes, such as porcelain tile or melanin-coated mill-work placed against the exterior walls against damage, but the air inside the building would be … musty, and less healthy, and the clothes in the closet will be covered by mold and mildew the next winter, and printer would refuse to print on wet letter-size paper, and the fridge, file cabinets, and all other steel components inside would be covered with rust in approximately one year. You have seen the video at the “Greening” seminar, didn’t you? You’ve got the idea.

Air barrier. There is none. Air just passes the cracked stucco and the masonry wall, as easily as rain water. Which explains why some mechanical engineers no longer bother to add a make-up air intake to their systems, resigned against the sad reality. Again, the owner is the one who will pay the exorbitant energy bills, long after the contractors collected their paychecks.

How to deal with it:

2. The CBS system without the flashings  needs a weather resistive barrier. You can add one under the stucco.

3.  Vapor retarder belongs outside the insulation, either along the stucco or at the outer face of the thermal insulation. It would keep the interior drier, and energy bills lower, because evap coils would see less latent heat.

4. Insulate the wall directly and do not allow for any bypasses  (i.e. adhere the polyiso board to the exterior wall and seal its edges with SPF).

5. Do NOT allow negatively pressurized cavities to suck on your building envelope!

6. If you already have the wall like that, you need a dam: since your bottom lightgage runner probably rusted away, when you replace it, please set it in a full bed of sealant… 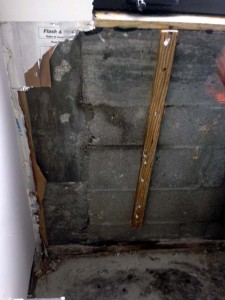 Exposed interior area of the exterior wall, below the water-tested window. Leak coming from the CBS wall. 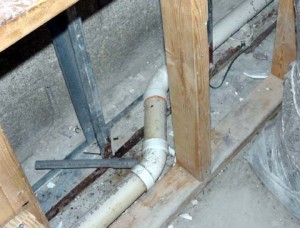 Why is this bottom runner so rusty? Because the exterior CBS wall leaks like a sieve. (Photo from another, unrelated project).

Leaks typically appear at water tables, created by floor slabs and windows’  heads and sills, because this is where the wall happens to be interrupted. Which is why  the building code wisely requires through-wall flashings. 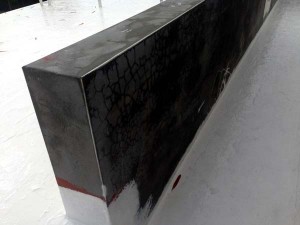 A stucco and concrete have a right to crack, which is why they are not normally specified to be a weather-resistive barrier.  Which is the reason why it’s unwise to rely on them for weather protection. Another interesting thing is how the liquid-applied roofing was terminated against this wall: against the front surface of the stucco, which makes me believe the window opening issues would be the least of their worries. Then, as in the old Russian saying it would be best to just paint it and sell it, and let the next owner to worry about it.

We haven’t exhausted all the issues I see in these walls yet, so stay tuned…