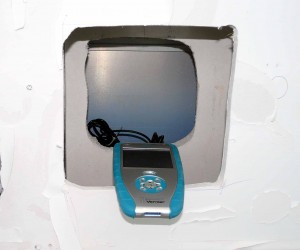 It’s not always rain leakage, we find in our investigations as facade doctors. We sometimes find no traces of water intrusion, as opposed to water condensing inside, where it can damage moisture-sensitive materials, and contribute to microbial growth i.e. mold and mildew. In such a case, we conduct long-term hygro thermal monitoring of suspect assemblies.

The picture shows the exploratory opening and the dew point meter  in the exterior wall affected by high humidity damage to interior millwork. We subsequently buried temperature and humidity sensors and closed the wall for two weeks, only to find out that the heat and moisture don’t mix well with interior wooden paneling. As the result of data analysis, the psychrometric conditions in this wall were found to be near Dew Point most of the time.

How to avoid such undesired situations?

Conduct hygro-thermal design analysis. This is why we conduct condensation risk assessments in early architectural design stages, comparing dew point temperature of air with  interior surface temperatures of  facade components.  We model critical façade assemblies to verify the condensation resistance using the state-of-the-art computerized tools and applications. Calculation of dew point is easily done by hand, but the energy performance of the assembly or detail is often complex enough to require analysis simulation in software for CFD (computational fluid dynamics). The popular software used for this purpose are WUFI and Therm. Thermal modeling software would yield the map of interior surface temperatures and identify any potential tendencies of the make-op to accumulate moisture over time.