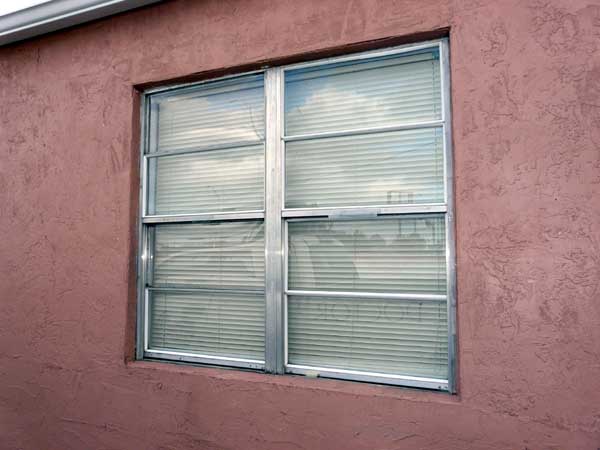 Over one year ago I purchased a dilapidated house in Miami. Among many items that required repair, were broken windows. Seeing neighborhood kids throwing rocks at my windows, I realized that the ordinary glass wouldn’t do. I paid extra and reglazed them with polycarbonate glass. It’s something that I recommend to everyone: for approximately $100, you can make your window impact resistant by reglazing it with polycarbonate glass, and supplementing perimeter fastening. It won’t meet the official criteria of opening protection, but it would be in many respects better than a brand new, certified impact-resistant fenestration. For example: it won’t break when a kid throws a rock at it.

Here is where we need a side explanation: The old lady who owned the house thirty years ago didn’t realize she is going to die soon, when she opened a window replacement permit in 1993. This was the time (after the Hurricane Andrew in 1992) when everyone and their brother wanted  impact-resistant fenestration. Unfortunately, the work was never performed and the building permit remained open after her death. Almost twenty years later, when I purchased the house, I was immediately cited by the Code Enforcement officers for the open permit. In spite of my certification that the work was never done, the Building Department refused to cancel the permit. Reglazing of windows is not a kind of work which requires a building permit, but I was forced to reopen the permit. Then, imagine my surprise when the county inspector failed the windows inspection. Why? Because of the polycarbonate glass in the old aluminum windows.

Strangely enough, substitution with polycarbonate is something I intended to write about for a long time, because it’s an amazingly efficient way to make your windows impact- and burglary- resistant. Not exactly to meet the High Velocity Hurricane Zone (HVHZ) tests (which are “diabolical,” to quote dear late Sak) but entirely sufficient to stand kids throwing rock, which is good enough for me. A hurricane is not likely to throw a 2×4 post in my window, anyway, so it would stand well against the average hurricane peril. 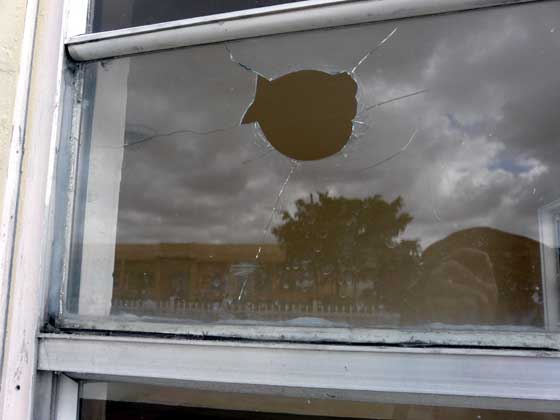 This hole wasn’t there yesterday… A rock was found on the floor inside. A discovery like that was commonplace before I replaced the glass with polycarbonate.

What is the difference between polycarbonate and ordinary annealed lime-soda glass in the typical old single hung aluminum window?

1) Polycarbonate is more expensive. If you buy sheets of polycarbonate (Lexan and Makrolon are common brand names) at a home improvement store, you would pay approximately 3-4 times more, than you would pay for the ordinary annealed soda-lime glass.

2) Polycarbonate is more thermally volatile than aluminum. In my case, the longest glass edge was a little bit over 3 feet long, so the calculated differential movement was negligible. Therefore, I installed them the same way, except I left clearances at all 4 edges. The original panes were installed in the aluminum sashes with a clear double-side adhesive tape, and with a sufficient clearance around the edges. I bought the 3M 4910 VHB 1/4″ tape, which is thick enough (40 MIL) to allow for the expected differential movement, and to compensate for minor surface imperfections, and provide a good, consistent seal. However, if you happen to have large glazing expanses, you would need to install it in a way that allows for the expected thermal differential movement, which may require a much thicker tape.

3) Polycarbonate is softer, which means it can be easily scratched during cleaning and maintenance. I took great care to cover it well when I spray-painted the house, so I didn’t have to scrape it, and it remains shiny.

4) Polycarbonate is generally less durable. In my forensic investigations, I noted that polycarbonate skylights (the most typical application where the polycarbonate is used in construction, besides the bulletproof security windows you can see in your bank) fail in approximately 20-30 years, while lime-soda glass can last forever (but it seldom does in one piece).

5) Polycarbonate hates UV, so make sure to buy a sheet with UV inhibitors.  (I additionally cover my windows with sheets of clear 4 mm thick plastic, so the UV never gets there. These are produced by Coroplast, which is  a brand name for an extruded channel board made of high impact polypropylene copolymer. These translucent sheets protect the remaining panes of ordinary lime-soda glass against stones, and their translucency gives occupants privacy. They themselves are not resistant to UV, so they fail in approximately one year, but they are inexpensive; I think I pay $13 per 4×8′ sheet at a local banner supply store in Miami.)

6) Polycarbonate hates a long list of chemicals beginning with the ordinary salt (abundant in marine air), construction sealants, and ending with many common household cleaning agents (i.e. containing ammonia). Some say that pure alcohol can be used for cleaning; I use only clean water.

7) DIY cannot buy a low-E polycarbonate glass. The low-E is one of the most important features in the South, because it reduces solar heat gain. However, my windows didn’t have such fancy features to start with, and I bet your old window didn’t have such a coating either. Anyway, it only matters for exposed windows on South, East, and West elevations, so if you have a nice projecting shade over your window, you are already on the safe side, otherwise a window replacement may be a more energy-efficient option (read about window replacement at the bottom).

2) Polycarbonate is much less likely to break than a laminated glass used in typical impact-resistant fenestration. Windborne projectile may leave a scratch, but you wouldn’t have to reglaze it every time  after impact.

3) Polycarbonate is much stronger than ordinary annealed glass, so you can save by buying a thinner sheet, (unless you care about glass deflection). Now, your window profiles (assuming you remedially anchored them) became the weakest link of your opening protection, so replacing i.e. 3/16″ thick glass with 3/16″ thick polycarbonate would be an overkill.  I used 1/8″ sheets. However, you may want a thicker glass (and a better hardware) if you plan to make your window burglar-proof.

4) Polycarbonate is  safe, so you can replace your fully tempered glazing in safety applications, such as glazed doors. This is the major benefit, since a fully tempered glass which is normally used in such applications cannot be cut, and therefore must be ordered to be fabricated to the exact size.

5) Polycarbonate is much easier to cut with common hand tools without risking breaking the entire pane, which makes it the perfect DIY reglazing material. If I measured wrong the first time and the pane turned out too large for the opening (which happens more often than I would like to admit), I can shave or grind small strips of material off, which would be challenging for regular glass. I store the excess material for emergency reglazing.

5) Polycarbonate limits the UV transmission through the glass, which means less interior fading and damage. It doesn’t mean you could now store your DVD collection in full sun, it just means they won’t be immediately ruined if you forgetfully leave them there.

I will add to the list, as I find more time…

Window Replacement Alternative. Now, many of you would probably ask: why not replace windows with tested and approved impact-resistant windows instead, getting all applicable benefits, such as energy savings, insurance discounts, warranty, etc? This is the same question I often ask myself.

Don’t understand me wrong, I am a licensed architect, and therefore I can see the reason for the permit requirements, but the implementation seems to be susceptible to improvement. I.e.: I paid over $300 in building permit fees for $50 laundry sink replacement, and spent several days on reworking the documentation, because I failed to pay the code enforcement inspector $500 bribe, when he proposed it in the very beginning. (My friend, who is a contractor,  couldn’t believe I refused to pay. He said it was a bargain.)  The reason why I was forced to replace a perfectly good sink, was the house I lived in featured two kitchens, and the inspector claimed it a violation, because the house with two kitchens can be possibly used as a duplex.  I was politely asked whether I am a Jew (Jews are apparently allowed have two kitchens for religious reasons).  No, I am not kidding.  I refused to verify whether I am a Jew. Hence, I had to make a laundry out of the second kitchen, and this entailed an ugly deep plastic sink in lieu of the nice stainless steel sink we had before.

Why not take a contractor and avoid some of the hassle altogether? This is probably what most Floridians do.  Unfortunately, I have as serious problem, because I cannot stand: 1) time waste 2) unprofessionalism 3) price gouging. I discovered the hard way that in majority of cases I spent less time, had better tools, and better understood the desired work performance than contractors I tried. I still occasionally try in my futile hope to be proven wrong.

Also, doing it yourself is fun. 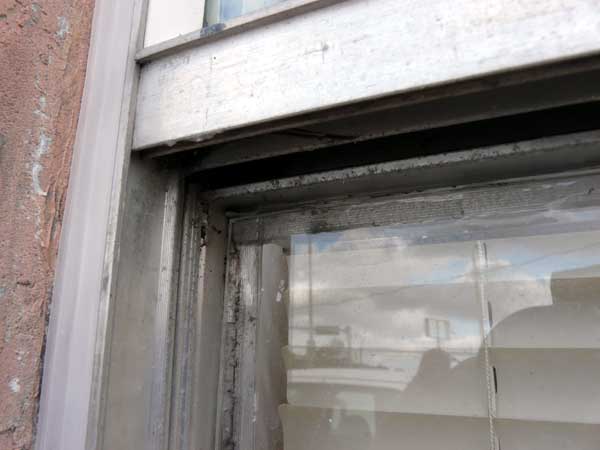 Corner of  polycarbonate glass adhered with double sided tape. Clearances were left on all four sides.

Summary:  For approximately $100, you can make your window impact resistant, by reglazing it with polycarbonate glass, and supplementing perimeter fastening. It won’t meet the official criteria of opening protection, but it would be in many respects better than a brand new, certified impact-resistant fenestration. If you are replacing a broken or cracked glass,  it would cost you less than a glazer would charge for a call. Results may vary, use at your own risk, etc.  don’t sue me for your hurt index finger, use gloves and other protective stuff!

(Supplementing perimeter fastening means you need to add tapcon fasteners where they are missing and preferably spray some polyurethane spray foam deep into the fastener holes before you install the screws: it would seal the windows and stabilize the connection.)

By the way:  The permit still remains open. The inspector politely explained that although he agrees the polycarbonate is actually an improvement over the  like-kind replacement, his  opinions does not count, and therefore he requested an as-built certificate from a  design professional.  I provided such a certificate, which he rejected because my name is on the title of the house, and therefore a perceived conflict of interest.

Help needed: If you happen to be a design professional registered in Florida, and want to help me out, I need such a certificate soon. Otherwise I would either have to reglaze the windows again with an ordinary glass, or deed the house to my in-law, so I can resubmit the certificate.

Update 05/12/2013. Thanks to the intervention of Director Charles Danger, the permit was closed. I would like to thank all supporters!

Solar Tint. I failed to mention other reasons why windows were cracked in the house. Previous users placed a dark tint on them, which stressed the glass thermally, causing their cracking. Also, security contractors installing plywood sheets over the windows, drew screws directly into the remaining intact glazing. 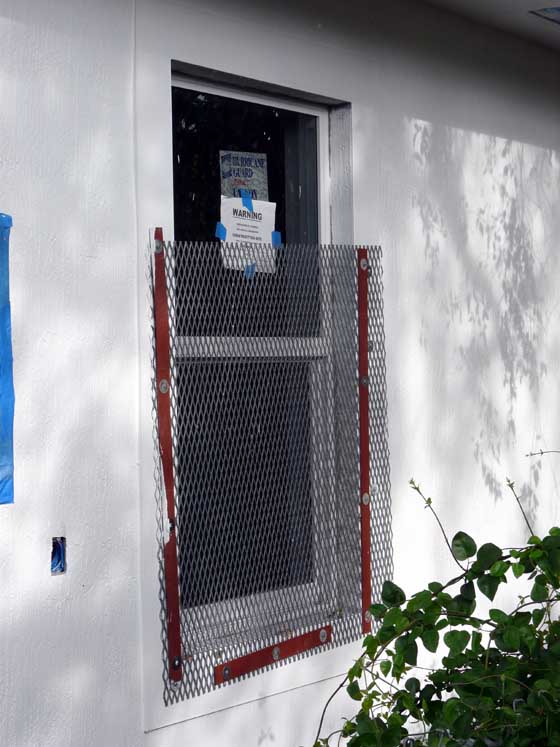 Expanded steel diamond mesh. This is how Habitat For Humanity protects their impact-resistant windows. They learned the hard way how much a replacement of  the laminated impact-resistant glass costs. Polycarbonate glass is trouble-free in that respect.