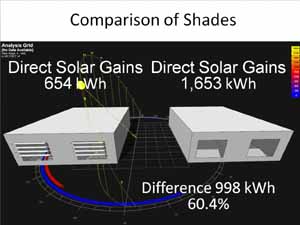 What kind of shade would you prefer to have over your head in the oppressively hot and sunny South Florida?  Many people choose their umbrellas (at the absence of rain). Solar energy may not be enough to run my photo voltaic system, but it is powerful enough to cause serious sunburns.

Playing with aesthetics of miscellaneous facade expressions, you might have quickly discovered that screens and shades are tremendously flexible tools, which allow you to carve and paint your facade almost entirely independent from the core. The trouble they are seldom covered by the budget. Not unless you can make a good case for them.

Wouldn’t it be nice to have a dollar tag attached to each exterior shade iteration, illustrating the associated energy savings? This kind of economic justification may find a readier response from the owner, particularly, if you are an architect, trying to justify your facade design.

There are many difficulties associated such an oversimplified representation of a building component: 1) every building is different, and therefore i.e. a shade in a super-efficient building would produce negligible savings, while the same shade installed in front of lousy windows may make a huge difference. 2) every site, every locale, and every orientation would produce different results, i.e. a shade behind a large tree would produce negligible results, 3) your design is often one-off, and therefore seldom described by a manufacturing catalogue number; therefore, you can seldom take advantage of the pre-engineering paid by the economies of mass production.

This is one of those seldom-covered areas, where facade engineers come handy. Let me know when they start teaching you that at your college, because I may need to retire then.

I explain these items in my seminar “Energy Conservation Principles in Building Envelope Design,” and I noticed how architects’ eyes lit when I explain how it’s done.

What are available DIY solutions for solar analysis? You might have played with the “optimum shading” tool in Ecotect (now Autodesk) software, only to produce awkward shapes or simply crashing the program. You might have studied energy codes and ASHRAE 90.1 to understand confusingly explained SHGC and projection factors. Congratulations, by the way, few made it that far.

What you need is to build and simulate two models: with and without the shade in a whole-building-energy software. If everything else is equal, the resulting difference is caused by the differential component. It would allow for the direct identification of solar gains achievable by identical models where the only variable is the shape and configuration of shades. This would be expressed in Btu*hr or kW*hr, representing the energy savings per year, which is much easier to translate to dollar terms. In our example, the potential saving is 998 kWh.

You and I know that your building and the shade is (lets’ hope) designed for longer than ten years; therefore, adding a shade is a sustainable thing to do. And it would make your building more unique.  Unfortunately, some architects settle on miserable shades, which don’t really deserve to be called so, because they cast a negligible shadow. When we are asked to simulate the cold bridging caused by their anchorage penetrating the curtain wall glazing, we can’t help but wonder how easily they could be re-designed in order to make them effective in reducing solar heat gain. Unfortunately, it’s often too late then, in the construction submittal  stage. Somehow, some architects use the energy from sun against their clients. And when we ask whether they conducted solar analysis, they have no good answer. 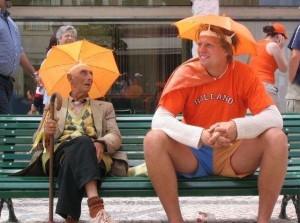