Tools of the Trade – Photographic Equipment 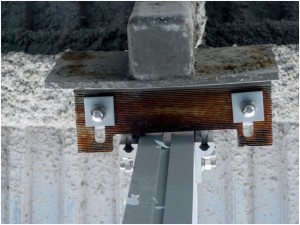 Picture is worth a thousand words. A good picture can also save a lot of nerves. A good photo of a construction defect or a facade failure is self-explanatory and often cuts unnecessary disputes before they even start. This is why I consider a camera to be my primary tool of  the trade.

Apparently, the photos illustrating my field reports stand out on their own, because one of the most often asked question I hear is “how did you take this photo?”

Several clients asked my advice on buying the photographic equipment, and I thought is would be good to share pro publico bono the one I gave recently. Here it is, below.

I only use ultrazooms because I typically take pictures of distant façade details. Here are some ultrazoom reviews: enough reading for a whole weekend from D Preview:  Here is the youngest descendant of my Panasonic camera, Nikon , Sony , and Canon.

There is no rule of thumb in the choice. Each model of each product comes with its pros and cons. I owned Olympus, Sony, Panasonic, etc: (ultrazooms only because of my profession). I.e. one Sony I used for 2+ years was great, and then I purchased a younger (and supposedly better) model, I sadly discovered that it missed the most important functions I needed. Some cons can be easily offset. I.e. short battery life is taken care of by purchasing extra large amperage battery, a bad built-in mic is easy to offset by purchasing a good add-on microphone, etc.

TRICKS OF THE TRADE

I use some pre-set settings because I typically: 1) cannot miss a photo, and 2) take pictures against something bright (a drop of water on a window frame shot against a bright sky and sun shining outside during water testing of a fenestration is a good example). Therefore, I use bracketing at several exposure settings, so every time I press a shutter, the camera takes three pictures, differing in exposure. This way I hope I would be able later to pick the acceptable one. I also preset the low-light exposure, by locking the settings on something dark at the same distance, (by pressing shutter half way and moving on the target before taking a picture). Target is not the only thing that moves.  Diminish the camera movement by pressing against something stable, i.e. a post, column, or tabletop.

You probably have noticed I don’t treat my equipment very kindly. I pack all cameras, extra batteries, memory cards, mic, cables and chargers in bubble envelopes and than throw them in one generic shopping bag. This way it fits better in my carryon bag. I discovered they are generally very durable, except for three aspects: 1) they hate water (this water testing spray disables them for at least one day), and 2) the unprotected lenses (i.e. GoPro housing) are prone to scratches, 3) a cable sheathing quickly breaks, exposing wires.

Warning: some of  online sites won’t even allow you to browse from a non-US location. However, Americans enjoy the very best prices and purchase terms in the world.

Once you determine which item you want, the places to look for a good price are bargain finders. i.e.: SlickDeals, XPBargains,  or Techbargains,  i.e. Canon PowerShot SX500 Deluxe Bundle – for $259.50

I am very cheap, so I always look to buy at a throw-away price in “refurbished” condition, and preferably combined with some discount coupons (i.e. on Black Friday). Good places to look for are i.e.: Canon Refurbs, Ecost, etc. Canon had some incredible deals on their refurbished High Definition camcorders on Black Friday last year, so it’s a good place to watch: i.e. VIXIA HF G10 was around $650 (normally over $1k).

Hope it helps. Let me know any questions.

Every time I am in New York City, I pilgrim to B&H store at 34 St and 9 Ave. It’s a photographic mecca. They also have a used equipment department. It’s a good place to start if one doesn’t know where to start. Book for at least two days.

The modern ultrazoom cameras reach very far. One indication is it becomes increasingly harder to identify the location of a detail photo taken with the ultrazoom. In the field, it means I need to use a powerful adjustable 20x-60x magnifying shooting scope ( I use Barska, but there are many products and brands to choose from), to find the detail of interest, before I am ready to actually shoot a photo. And such a scope requires a tripod if you have as shaky hands as mine. It still wins many times over getting an aerial platform to reach the remote location, or unreeeling and reeling ropes to repel the facade.

In many cases, the average camera won’t get in the space where we need it. This is i.e. the case with exploratory openings, which I reach with boroscopes, or high on facades, hidden behind a cornice. These situations call for specialized photographic equipment, justified by this specific line of business. The image from boroscopes can be captured by  either plugging them directly into a laptop or downloading from a memory card. However, I found my HD camcorder is a much better tool if I can fit it in the space, because of its low-light sensitivity.

On the other side, getting high on some elevations, i.e. inspecting the underside of a high skylight may be challenging even with the specialized access equipment we own. Therefore, I experimented with a remotely-controlled drone equipped with a HD video camcorder, which can fly in otherwise inaccessible spaces. I have not heard of anybody else using a drone for close-up  facade inspections, so I guess I am the first in the world, which gives me a pleasant high feeling:) 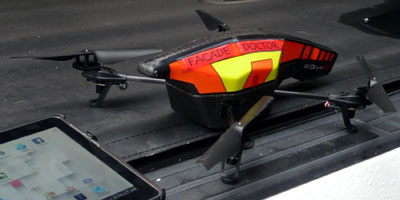 Facade Doctor Quadrocopter  Drone . Facade Doctor, LLC is the first in the world to use a drone for close-up facade inspections.

There are inherent risks associated with the building enclosure commissioning in the construction phase. Snapping photos during construction made me unpopular among contractors. This can be dangerous: one enraged bricklayer foreman laid his hands on me and tried to push me out of the scaffold after i took a picture of his inferior work in White Plains, NY several years ago.  More recently, a superintendent on one construction site became confrontational, seeing the GoPro strapped to my hardhat.  Contractors also feel uncomfortable realizing that I take photos of their work from hundreds feet away, and are not shy to voice their anger in my face, which I treat as a good opportunity to practice my English. In some locales (i.e. Florida State)  I have to ask subjects for permission for the recording first, unless the GC made subcontractors sign broad indemnifications. On the other hand, the photographic and video records are extremely valuable in arriving to the truth, and protecting the interest of the building owner.

I talk more about some tools of my trade in the seminar “Greening Building Envelopes.”

Google Analytics tells me this post is by far the most popular one on this site, probably thanks to its general character. Far less people (around 600 per month to be exact) search for building enclosure-related stuff online, than for photography-related advice. Anyway, for those of you who stopped by today, I noticed the Nikon P510 on sale today at woot for $199. This is a good deal for a 42x ultrazoom!