UAV (Unmanned Aerial Vehicles) in services of the facade inspector. 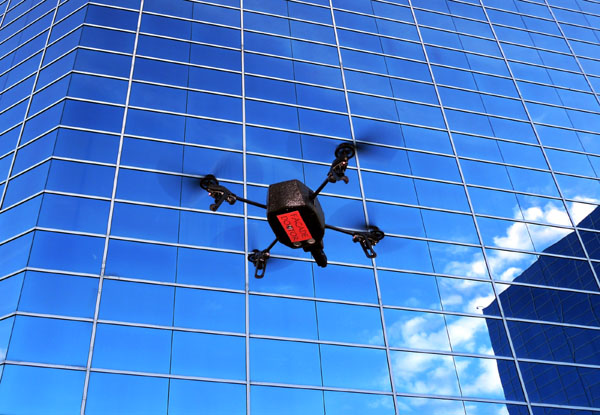 Unmanned aerial vehicle can be used for facade inspections.

Inspecting building facades is a risky business. I hang hundreds of feet above a ground on a rope thinner than my finger. Also, big overhangs and tall skylights are often not accessible at all. This is why I modified a popular remote-controlled toy drone to adapt it to the challenges of our trade. I have not heard of anyone else using unmanned aerial vehicles for forensic investigations of building enclosures, so i had to start from the scratch, by extending its range of flight, and adapting its sights.

A knowledgeable and experienced inspector operating an unmanned aerial vehicles can narrow the scope of the inspection by identifying those areas which will absolutely require human inspection, and consequently significantly reduce time, risk, and cost of facade inspection. All we risk is several hundred dollars of equipment as opposed to human life.

The device also cuts the risk of the potential budget buster which is the challenging access. We made it our selling point to include the cost of access in our proposals. After years of watching clients of other forensic consultants unpleasantly surprised by undisclosed thousands of dollars in “additional” bills for scaffold and cherry picker rentals, when i started on my own, I decided that this would be fundamentally unfair to our clients, so we always include all in our proposals. It’s the right thing to do;  however, it means that we carry the additional risk, because some facades are very tricky and expensive to access.

As said before, some facades are tricky to access by traditional means.  Some buildings may actually require partial demolition, several cranes,and severe business interruptions, such as the famous skylight above the train station in Secaucus Junction, NJ. High monumental skylights over enclosed courtyards and high overhangs should normally be designed with access gantries and other permanent means of access, which I listed in our article Danger Overhead: Ensuring Future Access for the Façade as seen in Construction Canada in May 2012. 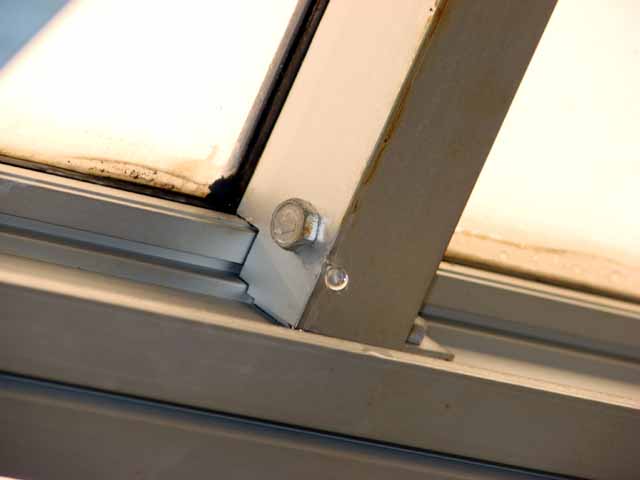 Observing a water-spray-testing of a large sloped glazing several years ago. The photo taken from an aerial platform brought inside the building. If the skylight were a little higher, we would not be able to see where it was leaking, absent a drone.

On the other hand, OSHA requires only tie-off points, such as roof davits, for personal fall protection and stabilization.  However, they are seldom regularly maintained and inspected. I ended up drilling holes and  installing my own anchors, which I later dismantled due to the potential liability (imagine someone using my anchors after they corroded several years later). It’s almost like mountain climbing, with every climber tracing his/her own route.

Facades of low- and mid-rise buildings may also be challenging to access these days. Many buildings in the aftermath of September 11th have been routinely equipped with anti-ramming perimeter protection, often combined with site-landscaping design features such as high berms and curbs, preventing access of many types of wheeled aerial platforms used before, such as cherry pickers and scissor lifts, commonly used for inspection and maintenance of low- and mid-rise structures. This is how federal buildings are designed now, including the VA Hospital in New Orleans, which facade design I consulted recently. Therefore, these building may require alternative means of access.

These buildings often present the unpleasant choice between unacceptable levels of risk and the high cost of access. Guess, in which department we typically observe owners and managers compromise? Few jurisdictions (such as New York City: Local Law 11, and Chicago) introduced mandatory facade safety inspections. In all cases, the regulations were introduced in response to casualties.

I am a lucky survivor of five serious safety incidents while inspecting building facades: a sudden unreeling and collapse of a steel cable coil, in which my legs got almost caught, a collapse of the roof deck on which I was standing, the power outage left me hanging on a skyscraper in the middle of a winter long after dusk, subject to hypothermia , and a sudden wind gust twisted our hanging scaffold 180 degrees around a corner of a tower. The fifth incident was more interesting: a deranged bricklayer grabbed me by my shirt and tried to push me out of a scaffold after I took a photo of his work.  (Contractors generally don’t like when someone documents quality of their work.)

I am hopeful the facade safety can be improved by UAVs.

The device can also help in seemingly mundane and menial tasks such as drafting roof plans by taking aerial pictures of roofs that can be converted in a roof plan, and the general assessment of a facade before a proposal is made, in case the plans are missing or the aerial pictures available on the internet are lacking sufficient detail. A set of pre-printed plans of a facade cuts the time  on the site and helps tremendously in our preparations for the inspection, particularly before and after we run infrared scans and mark the thermal bridging on facades.

This post was meant as a logical extension of the previous post about my photographic equipment, which I wrote as an email responding to questions posed by my two friends and clients, who looked for a good quality camera. Since the subject was slightly off-topics, I slanted it to include all photographic tools of my trade, including micro and macro: boroscopes and drones,  respectively.  I am glad this post generated such an amount of publicity.

Apparently drones and flying robots generate lots of interest these days, and I hope everybody agrees this is a perfect example of the peaceful application of the UAVs.  I am a recent Polish immigrant and a long-term member of an UN-affiliated world peace organisation; therefore, please moderate your comments accordingly.

As far as the privacy subject is involved, people would always complain, regardless whether they see me personally hanging behind their windows or whether they see the drone.  We always make sure they got notified in advance by the building management, so the ball is in their court to hang a curtain or close  the blinds when they need privacy.

Here is a relevant, in-depth article by Ms. Jennifer Lynch, the staff attorney with the Electronic Frontier Foundation, for those who are concerned about drones and privacy.

As the time allows, I will post some cool videos showing the unmanned inspection drone at work. 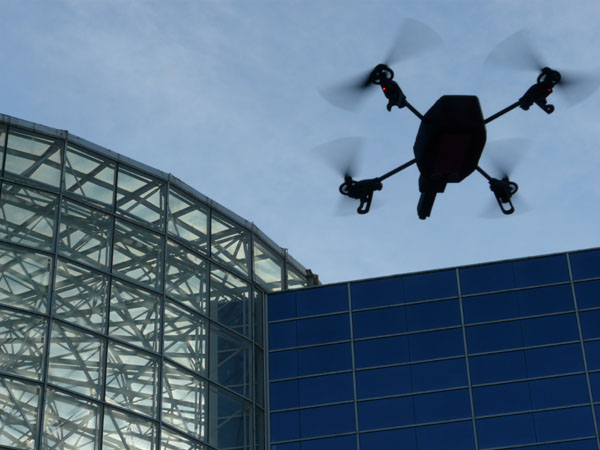 If you see a UFO hovering in front of your window, don’t worry. It may be a drone inspecting the facade of your building. And the operator watching through its cameras is an architect as opposed to a peeping pervert.