What is Glass (Glazing)? 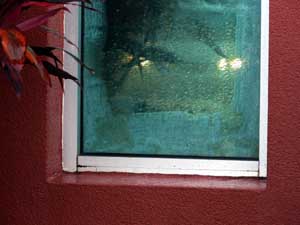 Deterioration of laminated glass in windows of the Miccosukee Resort and Gaming in Miami.

Glass is one of the strongest material known to man, although few would probably guess it, because of the common perception of fragility and brittleness. It has a great compressive strength, and in a sufficiently small scale (think fiberglass) it has also tremendous tensile strength (~10 times more than the ordinary structural steel).

HOW TO MAKE GLASS. If you grab a handful of sand and melt it with your acetylene torch, you would get glass. The process is called vitrification. But it wouldn’t look very pretty: just a glob of shiny substance. But if you poured this melt onto something flat, such as a molten tin, you would get a pretty flat glass sheet, resembling a window glass pane. This float method is relatively new, and prior to 1950’s, glass was formed by blowing and rolling, which produced awkward distortions.

SODA-LIME. In architectural applications we typically use the sode-lime glass, which simply means soda and lime (and some other additives) were added to the sand, in order to make it easier on the manufacturer. There are endless other formulations of glass, allowing for its use in such demanding applications as windows of space shuttles and smartphone and tablet touchscreens.

INSULATED GLASS. The average window glass pane today is manufactured by the float method, and then fabricated into insulated glass units (IGU), which is simply doubling glass plies with a cavity in-between, in order to reduce heat loss. If you, like me, tried to fabricate one yourself, be wary: it’s very challenging to permanently eliminate moisture from the cavity; therefore condensation forms inside the cavity, preventing clear vision.

LAMINATED GLASS. Glass breaks easily because in the architectural scale, its tensile strength is 100 times smaller. Therefore, it’s easy to get hurt by shards of glass, or fall from height through a broken glass ballustrade, or get hit by a windborne projectile (think a bird hitting your windshield). This is why before we place glass on walls, we glue two sheets of glass together in a process called lamination. The laminated glass comes with many benefits, but is relatively short-living.

DURABILITY. Glass is very durable. Absent few deteriorating (water+alkali) factors, it can last forever. The oldest known window glass is 270 years old. However, you noted the challenge I mentioned above: the average IGU spacer leaks steadily, and therefore the condensation would creep inside after 10 to 20 years. Also, the laminate layer in the laminated glass typically lasts only 5 to 10 years, particularly in the hot-and-humid climate, where it’s used the most for opening protection against hurricane missiles.

LOW E. Sun can easily turn your car or building into a frying pan. Not if you shield it with a sheet of metal. The trick is to make the sheet thin enough to become (almost) invisible, and prevent its corrosion and abrasion. Therefore, the average insulated glass unit has a thin layer of noble metal (i.e silver) deposited on the face of the glass facing the air cavity. It reduces the radiation, and makes your life easier, if you happen to have a window seat.

TOUGHENED GLASS. Glass can be toughened like steel, doubling or quadrupling its strength. The additional benefit is the reduction of size of the glass shards, which makes it less injurious. There are some drawbacks: Heat strenghtening requires placing glass in a furnace; therefore, glass size is limited by the size of the furnace (the typical 7 x12 ft limit), glass cannot be cut or drilled afterwards, and the fully tempered (FT) glass may break spontaneously due to nickel sulfide inclusion.

GLAZING. Glazing for windows or curtain walls, is the process of installation of glass panes in frames and sashes. The noun is also used interchangeably with glass, and so used in some building codes.

GLASS HOUSES. Many are fascinated by the idea of glass houses, popularized in the beginning of the 20th century. Architects, such as Ludwig Mies Von Der Rohe, benefitting from expanded production size capabilities, introduced full-height, wide glazed expanses into the modern architecture. In the 21st century, we are still slowly getting there, by using the strength of the glass to support the building structure; therefore eliminating any remaining visual obstructions. Have you walked on a glass floor or glass staircase (i.e. in flagship Apple stores)? These are examples of glass used in structural capacity, introduced by facade engineers such as Dewhurst Macfarlane & Partners.