Winter Syndrome – Not So Much “Winter,” Anymore…

I have all kinds of people approaching me after my seminars, and I distinctively remember one gentleman who came to me in Coral Gables two or three years ago. He identified himself as a mechanical engineer and asked me for my advice. He said his son contracted a chronic respiratory illness after he replaced fenestration in his house with bran new, hurricane-proof windows.

Why do I remember it so well? Because it was sad for two reasons: someone got hurt, and a licensed mechanical engineer couldn’t recognize the phenomena behind the symptoms in his own domain. He needed an architect to tell him that his AC system no longer cuts it.

At another seminar I showed a thermal image of a facade of a building I had recently investigated in Coral Gables, and asked participants if they saw anything irregular. No-one did. The windows of the building were hotter than the wall. Why? Because no-one ever removed the hurricane panels from them. Why did it matter? Having these windows covered represented approximately two tons of excess refrigeration, wreaking havoc with the interior air quality, and making people sick.

You heard me saying that the life of a building physicist in South Florida is remarkably simple: if the phone call is in a winter, the culprit is probably the “Winter Syndrome, and if the phone call is in the summer, it’s probably the “Summer Syndrome.” I stand corrected:  on two recent projects, I observed the Winter Syndrome in spite of the temperatures approaching the summer design day in Miami.

What is the Winter Syndrome again? If you live in humid and hot climate like  South Florida, and your AC doesn’t work as often in a winter as it does in a summer, and you have no dehumidification installed, the interior air gets uncomfortably humid, leading to unpleasant symptoms including spontaneous microbial growth, rust, health problems, etc. It’s typically externalized by mold and mildew growing around AC diffusers, indicating the unmatched load. 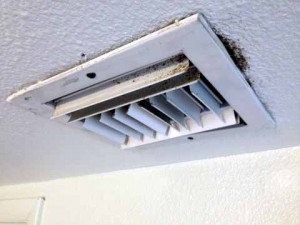 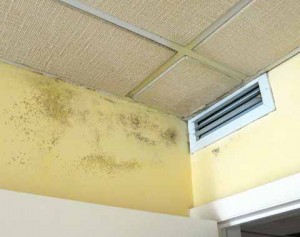 How do you know this is the Winter Syndrome? It often looks like yet another leaky building. Architects and building managers most typically describe them to me as rain leaks, and become very suspicious when I ask AC-related questions. When I come, and stick my sensors everywhere, my RH sensors would get crazy because the air is really badly saturated with moisture, and these sensors are only good up to approximately 95% RH. The results would show the Dew Point is actually lower than the air temperature, as indicated on the chart below. 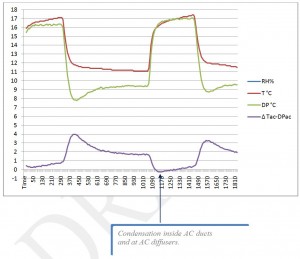 What you see here came from a 10 ton air handler, which cycled approximately every 20 minutes. After the compressor shut down, the air delivered by the air handler was over-saturated with moisture. How do I know? The Dew Point is higher than the ambient air temperature. (Btw. the Y axis is in degrees Celsius, because I am European).

This is kind of expected and normal in partial load conditions, like winter, or partial occupation in buildings with lots of heat-producing equipment. Either there is not enough heat from the sun because it’s cloudy, or from human activities, or someone was too lazy to remove hurricane shutters, meaning that the heat load assumptions on which the AC was designed and built are much higher than the temporary load. “Expected and normal” doesn’t mean it’s healthy and correct, it just means this is the accepted norm in construction, even nowadays.

Well, how about the summer time? If the AC cannot remove humidity in the middle of the summer, and it’s not because of modifications to the building envelope such as i.e. new windows, or a new thermal insulation installed, or perhaps a bunch of tall trees which grew up in the meantime, it means that the AC was probably screwed up from the very beginning.

So now that we know the phenomena behind the symptoms, how do we deal with the issue like that?  The best way would be to replace the existing compressor with two compressors of different capacities, and configure them into a three stage system, or get a two stage compressor, or install a hot gas bypass. Good luck with any of that.  I am an architect, so I went to ask mechanical people, and asked around in mechanical supply stores. Needless to say, they accused me of insanity. The best I was able to accomplish was replacing the compressor with a smaller one, at the cost of a warranty, because the suppliers thought I must be crazy to install a small compressor in a large condenser, and refused to provide me with a warranty on a new unit.  (Over-sizing coils is actually what manufacturers do to increase efficiency, which is the reason why a condenser is often matched with a larger air handler.) However, keep in mind it’s Miami, the center of incompetence.

What I was able to accomplish is shown on the following chart (5 ton modified to 3 tons): 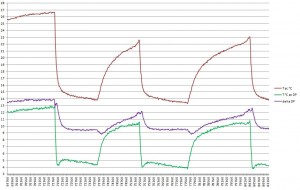 This is a dense chart, because the AC cycles on average every 1:07 hr now, as opposed to 28 minutes measured before the modification, which took place on 10/16/2014. The closest the Dew Point ever got to the ambient air temperature was 8.65 degrees C. The funny thing is the air feels cooler now because of the lower humidity,  so the thermostat set-point was moved higher. Also, the 1 hp air handler motor was replaced with a 1/2 hp.

Cost of the modification? Approximately $300 installed. Now, some of you will surely ask whether it means the unit would save energy. The answer is no. The old 5 ton compressor drew 32 Amps, while the 3 ton compressor approximately half of that, but it runs twice as long.  Also, there is more latent load removed, which means that more work is done.  It’s much healthier though, and health is much more important than money.

Before we did the switch, I looked at the high efficiency AC systems, which can save up to 50% energy, and pay for themselves in the long term, because of their use of variable speed motors. I am little worried about servicing those units. Based on my research, two stage compressor and variable speed motors are not available in the average AC supply store, so early adopters will need those exteeeended warranty plans really badly. The initial cost also played the role. Although the system costs less than $3k, the cost of installation would double it. Since we need at least five units of this kind, I reached out to suppliers in China to get these AC systems economically in bulk quantity. Before we bargain them, the $300 compressor replacement would remove the issue from the priority list for a while.