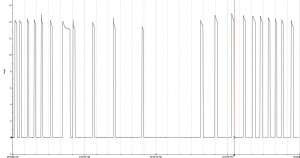 This is the power measurement taken from a 3 ton central AC condenser in South Florida for one day. It’s a nice snapshot of an AC pulse, expressed in electrical current per time.

For mathematically challenged: after multiplying the number of amperes showed on the vertical axis by ~230 volts (not shown here), we arrive to approximately 3,200 Watts of power. This is equivalent of  320 led bulbs rated at 10W (equivalent of old incandescent 100W light bulbs). For comparison, there are 16 bulbs used to lit my house.

So, in other words, every time this unit goes off, we could just brightly lit 20 houses with the power used by this air conditioner, not counting the interior air handler which adds approximately 3 brightly lit houses.

If you read my recent post on HVAC zoning, you may now get the big picture: this single wall thermostat is not just turning a whole house on. It is akin to turning lights in 23 houses.

It’s responsible for ~1/3-1/4 of the total energy use in an old house with  uninsulated walls and windows, which in this particular case translates into approximately $700 a year.

It is also a good signature for health diagnosis of the system. Aging compressor? Inadequate refrigerant charge? It can be read between the lines.

How can you measure it? All it takes is a current transducer and a datalogger.  I am still paying off the loans which I took to purchase the professional equipment, but you can do it for much less. As I am slowly learning programming microprocessors, I discovered how relatively reliable and inexpensive became sensors which we can use for home monitoring: temperature, pressure, humidity, light, current, voltage, movement, smoke, water, CO2, and CO sensors to name a few. Most can be had for approximately $1 if one is patient enough to wait two weeks for them being shipped from China, and occasionally held by customs a little longer. These are good quality brands such as Bosch, and they can be installed redundant to reduce risk of defective ones.  Many come bundled, such as the temperature and humidity sensor I used in my experimental setup to drive a servomechanism of an AC diffuser. 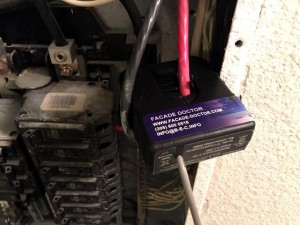 Most residential dwellings are very similar in their functions, and can be sensorized, pre-wired, and programmed later with several repetitive options, as the total cost of materials would account for less than $100, with copper cables being the most expensive part. Commissioning would become a lifelong experience, all parameters would be continually monitored, and systems fine-tuned to achieve a comfortable and energy efficient configuration. Purchase decisions would become more educated, based on facts and hard data, as opposed to marketing claims.

Imagine, for example, that you live in this building in South Florida built recently and therefore thermally insulated. Your monthly electrical bill is twice your neighbor’s, and there are dark spots of microbial growth on AC registers. What would you do? I know people who spent thousands to get air samples collected and lab tested, and then  spent thousands more to litigate against contractors. Others may spending hundreds on a wireless, voice recognizing, smart thermostat system, or whatever else was marketed as a state of the art panaceum at the time. Unfortunately none of these would bring you closer to solve your existing problems.

However, with the monitoring,  all you would need to do is to have a look at your charts, or to program the software to issue reports of any irregularities and possible improvements. You would perhaps notice that the temperature sensors located in the forced air ducts show the supply air is repetitively below the adjacent ambient Dew Point, perhaps explaining those dark spots on your registers. High temperature readings in the attics may partially explain the irritating energy bill, and high humidity and low pressure readings coming from sensors on your exterior walls would explain the musty odor. What musty odor? You became too acquainted to notice it any more, and your guests are too nice to bring it to your attention.

So, how come every new house does NOT come fully equipped and pre-wired for automation?  Someone smarter must have figured it all out by now? However, if you look at the offering of the marketplace, it’s mostly irrelevant, unreliable, and self-contained. Congratulations, you can control lights in your dining room with a smartphone, and it only takes six or seven clicks, as opposed to simply flipping a wall switch. And you spent several hours with a customer’s support to troubleshoot the system and accomplish this admirable feat!

Houses don’t come pre-wired, and therefore smart home systems are designed and sold as wireless, which makes them fundamentally unreliable. If you live in a single family house like me,  you may not realize how literally crowded is the air. I didn’t, until I used my radio-controlled drone and a WiFi GoPro to remotely inspect exterior walls of a high-rise building. Two-way communication was lost in two floors height, roughly after 20 feet. A Wi-Fi replicator helped, but needed to be dropped on a rope to be approximately half-way between the observer and the device. These are challenges of wireless devices. Trust me, you don’t want to deal with them every day.

How do you wire a house with an existing forced air system? I just read a blog describing an admirable DIY method, which involved sending a parachute up the ductwork. The parachute was sent from the hood of an air handler, and it was made of a plastic shopping bag, pulling a fishing mono-filament, which was then used to pull the required 22 gauge cable for the servo controlling the register and for the psychrometric sensors. Whoever invented it was a genius. We need more of them.