If you live in America, you might have wondered why HVAC in your dwelling isn’t zoned. You can either turn it off or on, based on a single thermostat, in the most typical configuration. This is akin to having only one light  switch to turn lights on or off in the entire house. When compared to lighting, doesn’t it seem stupid and wasteful? Well, indeed it is.  Even if you live in a large house divided in several zones  by several air handlers, each zone would serve ~2,000 square feet give or take.

In fact, it’s even worse, as explained in my description of the energy monitoring. You turn on and off all lights in 20 houses, comparatively speaking. That’s how much more energy a typical air conditioner consumes.

Other continents are doing slightly better, mainly because their inventory of real estate is either older or designed by architects who never heard about forced air systems. There is no space for air ducts. Therefore, they typically install mini-split heat pumps, which individually distribute refrigerant to fancoils serving individual zones. Distribution is achieved by much more manageable 1/4″ and 3/8″ diameter copper tubing and wiring as opposed to insulated air ducts several inches in diameter. These mini splits are as expensive as they are efficient. Comparing the average mini-split to the average central air system popular in the U.S. made me gasp with astonishment, because the current draw was found to be many times lower, and comfort superior. 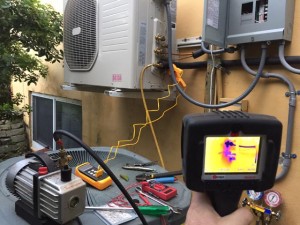 Back to America. If you stop by the typical HVAC supplier or a home improvement store and succumb to an overwhelming marketing, you may buy the state of the art learning touchscreen thermostat for several hundred dollars, only to discover that you are still turning the entire house on or off. So much for the promised energy savings.

The preferred solution would divide the dwelling unit into zones, which would be independently heated, cooled, and ventilated. To accomplish that, we would need to start with a system that, to my current knowledge, doesn’t exist on the market. We would begin with the ideal HVAC system described by John Straube, with a separately ducted ventilation, and have individual fancoil units with individually ducted returns.

How about retrofitting existing systems? Good luck with that. There are some interesting grassroots efforts of concerned citizens who discovered there is no commercial solution available, and decided to build one themselves, typically to remediate some extreme thermal discomfort resulting from an existing HVAC configuration.

The solution typically involves an I/O board plus  temperature and humidity sensors installed in each zone and controlling servomechanisms modulating register’s louvers in those zones, and a relay board in lieu of the central thermostat. It would need to be driven by a microprocessor, like a dedicated stationary computer or Arduino board. A system like this can be controlled remotely by adding a radio, GSM, or Ethernet interface, with at least one dedicated Android app written and maintained by Mr. Vadim Tkachenko, a software engineer from Phoenix (why are Eastern Europeans so dominant on this scene, in a country of 300 million people, I cannot comprehend).

These systems should include ventilation; fresh air should be individually injected based on readings from individual CO2 sensors. It would also require pressure sensors to dynamically balance the system and for example ask for an air filter replacement. It would also need  dedicated dehumidification or humidification or both. Interesting addition would be energy monitoring using current transformers, which would also allow for early diagnosis of aging motors and compressors.I have not seen independent solutions like that yet, most likely due to the lack of professional involvement: based on my Internet research, home automation is typically attempted by individuals with programming skills and experience in robotics.

I read with interest some of these blogs and decided to try myself, as I am currently building my own house from a scratch.  Below is a picture of an experimental setup of a $5 floor register with a $10 servo and a $10 temperature and RH sensor controlled by a $40 Arduino board. I am learning C++ programming language as we speak, and find it quite challenging… 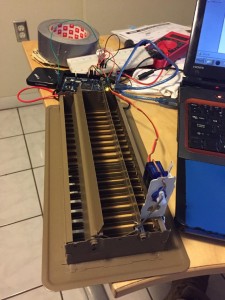